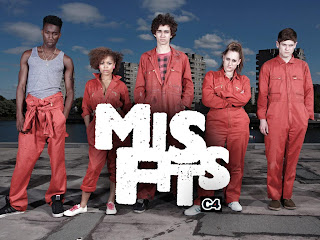 So I wanted to write a review of the Vampire Academy series which I'm almost finished reading, or the Vampire Diaries TV series which I'm painfully making my reluctant way through (bet you can't guess if the review'll be positive or negative), or the first season of Buffy which I'm watching for something like the fifth time (same bet applies) but instead I'm going to write about Misfits again, even though teenagers with superpowers aren't technically what I'm studying. Still, any time spent not watching the Vampire Diaries is time well spent for me.

Alan & I watched the first two seasons of Misfits in under a week (& although I have more to say on the show as a whole I think I'll stick to season one for now, lest this post become a novel). Some episodes were scary, some were silly, all were still very easy to watch, still funny, still well-acted, still prettily shot, & still quite problematic when it comes to women & sexuality.

The next character on my list of Bad Things That Happen to Women in Misfits When They Display Their Sexuality is Sally, Rage Zombie Probation Officer's erstwhile fiancée & replacement probation officer for our gang of unlikely superheroes. Sally suspects the motley bunch of knowing Rage Zombie's whereabouts (under the foundations of a bridge) & goes so far as to suspect that they've killed him (which they have, hence the under-a-bridge body dumping).

Sally spends a lot of her time appearing behind the main characters in locker rooms accompanied by creepy music & overhearing suspicious titbits of conversation only seconds after the fact that they've killed their probation officer & dumped the body under a bridge is mentioned. After trying to rouse an incompetent police force to find her missing fiancé (“No, Sally, see, we have records that he used his credit card this one time since his disappearance & that means he's still alive even though there's no evidence that he's withdrawn any money or made any payments at all since he went missing except buying a plane ticket to Somewhere Far Away. Maybe he just doesn't love you anymore. Did you ever think of that?”) she decides to carry out her own investigation, by way of seducing Simon.

There's lots of sexual tension & kissing & canoodling & soon Sally begins to believe that Simon's trying to cover up for the other, less sympathetic delinquents (less sympathetic to her I mean; I'm still pretty creeped out by Simon personally). Things heat up in the community centre one evening & when Simon's gone to get more wine Sally swipes his phone & sees all manner of incriminating evidence on the videos that he's always obsessively making (“I knew that'd come back to haunt them,” I exclaim, having scolded Simon throughout the previous episodes for filming such sensitive information). Of course Simon finds out. He then goes into Horror Movie Mode & they fight & it's pretty brutal & then he sort-of-accidentally-but-what-did-he-expect kills her by slamming her head against a door. Clearly this is what happens when you use your sexuality to get what you want. You end up dead with your head bashed in, stowed in a freezer for the creepy superhero dude who killed you to occasionally open so that he can stare forlornly at your slowly decaying corpse.

In an extraordinarily Buffy-esque plotline, a young woman bullied by her peers because of her virginity finds out that the storm has given her the power to compel people to renounce their wicked ways & give up smoking, drinking, swearing & “dressing like a slut” & join her & her group of pastel-wearing born-again puritans.

It's a great episode. It's just the right amount of silly (“this is breaking my heart – you're wearing cardigans!”) & serious (there's something sincerely unsettling about seeing the Virtue cult throw bags over people's heads & drag them to a secluded place for Rachel to politely compel them to believe that they could do so much better), & really makes the characters & the audience think about their vices, their nonconformity & the little quirks that make them them.

While it's obvious that a lot of Rachel's words make sense – she tells the gang they're wasting their potential, that they could do so much better than being petty delinquents with no thoughts of the future – it's just as obvious that making everybody a beige-clad replica of everybody else & stripping them entirely of their personalities is even more of a problem. Nathan (who clearly dominates this episode) gives Kelly quite a moving little speech about how he's always loved her foul mouth, quick temper & chavvy dress sense (“Argos is really underrated you know. Who says you can't buy an engagement ring & a George Foreman in the same place?”) & later gives an animated sermon to the assembled Virtue cult about how they are young & it's their right to make mistakes & screw up sometimes, to drink too much & have sex with whoever they like (well, until their late twenties, maybe early thirties) before he falls to his death impaled on a fence & later wakes up in his coffin to discover he's immortal.

Immortality aside, the episode's message seems pretty simple. Nobody's perfect, young people screw up, & that has to be okay or else everyone would be a conservative drone & no one would have any personality.

Rachel is ridiculed by the gang, like by her peers before the storm, for her modest dress sense & inferred virginity. Alisha becomes, in contrast, the modern, relaxed, sexually liberated young woman who doesn't brainwash people into chastitiy. So where does this fit with the messages the rest of the show has been giving its viewers about female sexuality? It seems to be a case of damned if you do & damned if you don't. If you engage in casual sex & are comfortable with your sexuality you get raped. If you refuse to have sex at all you're a brainwashing freak that people only like because they've been forced to & then you fall off a building & die but nobody notices because one of the main character does too & everyone forgets about you in the commotion. (Okay, maybe I'm pushing the point just a little bit for comedic effect.)

I don't really have an answer to my own question. I'm not even sure I have a question. Maybe Misfits is sending out mixed messages. Maybe it is a “damned if you do, damned if you don't” kind of situation. Maybe it's just reflecting the world rather than judging it. Or maybe it's something about women who decide what they want to do with their bodies; who don't let the culture they live in or the men who desire them dictate their sexual choices. These are the women who get punished. These are the women who get put back in their place. Alisha, before the storm, was unflinchingly confident in her sexuality & in the power her body afforded her. I'm not going to deny that this was a limited power, but rather than deny or dampen down her sexuality she used it fearlessly, & to her own advantage. Rachel, despite her peers' teasing, made a conscious decision to remain celibate, & faced harassment & ridicule because of this choice. Like Alisha, she took control of her body back from society. Whether they be virgins or whores, this seems to imply, the choice shouldn't be with the woman herself.

I'd love to hear your opinions on the matter (& you don't have to worry about spoilers any more; Vampire Diaries procrastination means I'm well caught up). Penny for your thoughts?
Posted by Moïra at 1:02 PM