A small collection of links found across the internet this week(ish), because they've all been copy-pasted to my desktop stickynotes & it's starting to look very cluttered around here.

The Daily Mail wrote an infuriating piece on the "rise of sick-lit" in YA which is sort of like that article in the Wall Street Journal two years ago, only it's the Daily Mail so we don't have to take it as seriously. There have been some great responses to the piece, though, most notably in The Guardian, although John Green's only tweet on the subject wins the Best Reaction award by a mile: 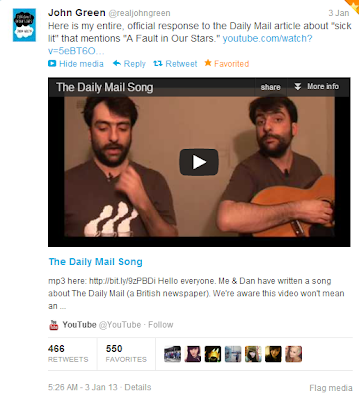 The direct link to the Daily Mail song is here, but I warn you, if you click on it it'll be in your head for the rest of the day.

Speaking of John Green, the Fault in Our Stars book tour is coming to Dublin! Tickets are available here for the RDS concert hall on the 6th of February.

Filmmaker D. Christopher Salmon is producing a short film based on one of my favourite Neil Gaiman short stories The Price. A mock-up of the animation can be watched here. I can't wait to see the finished film, but at the same time I'm sort of in love with the storyboard as it is.

Kirsten Dunst totally wins the Celebrities Who Once Posed for Books Covers competition. (What do you mean it's not a competition?)

The Guardian introduces the Lousy Book Covers Tumblr, & it's kind of hilarious.

The School Library Journal blog A Chair, a Fireplace and a Tea Cozy asks an interesting question: how many YA books can you think of that feature menstruation? How many female heroes trek through dystopian wildernesses for months without seeming to have to worry about buying tampons? If Edward can smell Bella's blood in Twilight then... I should probably just cut this sentence short, shouldn't I? I think it's for the best.