Things I Have Learned from the Vampire Diaries Season One 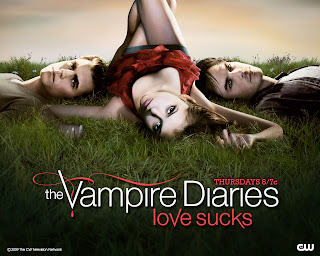 If you name a town Mystic Falls, you've got what's coming to you
(What's coming to you is usually vampires)
Vampires always go back to highschool
Vampires like American football
Vampires have been playing American football since 1864
Vervaine is the new garlic
Stalking the human girl who looks exactly like your evil vampire ex-girlfriend & then going out with her is really not creepy at all
It's especially not creepy when your bad boy brother - who was also involved with said evil vampire ex-girlfriend - falls in love with her human lookalike too
Girls who ask boys out are pathetic & will be manipulated by all of said boys
Alternatively, they're vampires
If the boy you're seeing stands you up, is rude to you or doesn't text you back, it's not because he doesn't like you/ is a jerk, it's because he's a vampire & has more important things to do & you just wouldn't understand
All African-American women are witches
(There is no such thing as African-American men)
(Post episode 15: okay fine, there is no such thing as human African-American men)
Never invite teachers, aunts' ex-lovers or pizza delivery boys into your home because they're all vampires
Actually, anyone who asks to come into your home is probably a vampire
Having lived through the 50s automatically means you can dance
You can tell your boyfriend is/is turning into a Bad Boy if he wears a leather jacket & drives a fancy car
Bad Boys drink human blood
Also, their hair gets more vertical
The Bad Boy is always secretly good
Cheating is totally fine once both boys are brothers
Killing yourself to become a vampire is a totally acceptable way of dealing with your problems
Nobody actually ever stays dead
Posted by Moïra at 12:26 PM