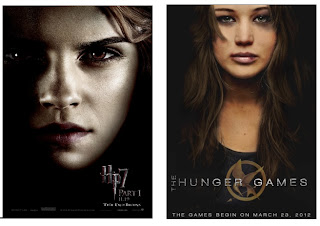 Hello! I'm posting again! It's quite shocking, even to me! I have some links for you! And then I'm going to talk about Harry Potter for a bit! And now I'm going to stop with the exclamation marks.

The first link is to a post by Alyssa Rosenberg about Harry Potter, Katniss Everdeen & Movement Mascots, because it's pretty interesting, & the second is to a piece by Sady Doyle that the first link refers to: In Praise of Joanne Rowling's Hermione Granger Series

(ETA: Also, because I'm a few days late with this, here's the link to Sady Doyle's response to the feedback on her first post, where she makes a lot of good points. )

My second problem with the piece is this: it is entirely possible for a male character to represent gender equality. In a perfect society girls & boys would be represented equally in children's books and on television, but unfortunately we don't live in that society, & in order to raise these issues with children of all genders it seems to often be necessary to speak through a male character's mouth. The Harry Potter series is hardly a beacon of anti-feminism, but my thoughts on gender roles in the series are multiple & variant (& often contradictory) & could take up an entire thesis let alone a blog post, so I'll let them be for now.

I think that there might be a difference between feminist texts & texts with Strong Female Characters. Not all feminist texts have strong female characters & not all strong female characters live in feminist texts. Hermione Granger is a Strong Female Character. However, if she were the protagonist of Hermione Granger & the Philosopher's Stone the book, unfortunately, would never have been published. Harry Potter's opinion & treatment of women, however, is not unlike Hermione's. He accepts that women can be as intelligent & adventurous as men (he respects Professor McGonagall as much as he does Professor Dumbledore & trusts & relies on Hermione as much as he does Ron) & also that they can be as powerful & evil (he hesitates no more in fighting Bellatrix than he does Voldemort). Gender roles in the series aside, that's a pretty big feminist step.

So while, yes, we should certainly be angry & disappointed that the popular culture we've grown up with over-sexualises, underestimates & under-represents women & girls, & we should what we can to raise awareness about these inequalities in order to change them, let's also celebrate the small victories, the Strong Female Characters, the Hermione Grangers, Lyra Belacquas & Katniss Everdeens of the world.

I'm writing a book at the moment (at the same time as a PhD thesis, because I'm just that much of a masochist compulsive writer). It's a young adult book, it's got werewolves & vampires in it, & it has a male main character. In its first draft it was a sort-of-ghost-story with a female protagonist but when I sat down to rewrite the second draft the first sentence that went down on paper was "Dylan's mam always said he could lie for Ireland" & Dylan just sort of took the story from there. The reason I kept him as my main character is the same reason I decided to make the sort-of-ghosts werewolves & in a later draft added some vampires. I enjoy reading young adult fiction & mostly I enjoy researching it. I know quite a lot about it at this point, which means that I know what works (&, presumably, what doesn't work) & also what sells. Male main characters sell. Vampires & werewolves sell. If I want any chance of somebody publishing this book if I ever when I finally finish it, I want it to be as sellable as possible. However, this book will still have feminist leanings. It'll still have Strong Female Characters. And hopefully the boys who read it (my teenage brother'll be the first, as Representative of my Intended Readership) will pick up on the idea that girls & boys deserve to be treated equally & will apply that to their own lives. What about you, Writing Readers? What gender are your protagonists? (What gender are you?) Why?

And, in the same vein, who were your #childhoodfeministheroes? Who are your favourite Strong Female Characters?
Posted by Moïra at 7:02 PM