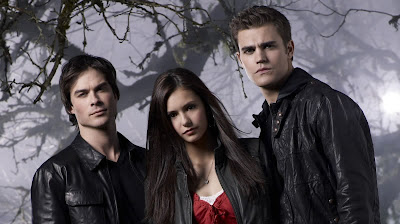 As you can possibly tell from the absence of posts, I managed to stop procrastinating & write my chapter, which means I haven't been writing much else that isn't confined to 140 characters. (I like Twitter! Who knew?) Then I was sick & then I was at Electric Picnic & then I was sick again which is what happens when you go to a music festival with a high temperature. Now I am no longer procrastinating & no longer at Electric Picnic & no longer sick & I am busy with the revisions to the aforementioned chapter & catching up on the epic to-do-list that grew monstrously when I wasn't looking. I also need to clean the house. But enough about me! More about The Vampire Diaries! It's the show we all love to hate! This is me watching the entire. Second. Season. (Which was painful, hence the need for the full stops after every word.) And taking down the lessons I was learning as I went. Here are those invaluable life lessons:

Things I have learned from The Vampire Diaries Season 2:

You can't have vampires without werewolves.
You can always tell who the Good Doppleganger is: she's the one with the straight hair. Cause only good guys have straight hair. (And only bad guys dress in black.) 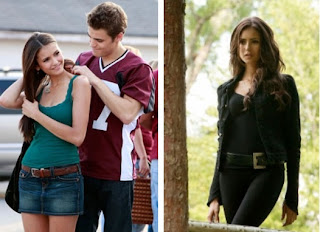 Rich people have swords just lying around in their gardens, true story.
People don't stay dead. Seriously. Ever.
Angry jock guys are only angry because they're werewolves, not because they're jerks.
If you are a vampire who wants to out a werewolf, you should choose the only African-American human male character in two seasons to pick a fight with him. Cause, y'know, if you picked a white guy it just wouldn't be realistic... God I hate this show.
Vampires are messy eaters. (It would probably help if they kept their mouths closed.)

Small towns in America hold Events every other weekend (dances, bakeoffs, barbecues, balls, fundraisers, competitions, bizarre re-enactments). Maybe this is really true - I've never been to the States but I've been re-watching Gilmore Girls in my spare time & that's pretty much the same thing, right? Can any small town USians confirm or deny this? Do I know any Americans from small towns? Is there even such a thing? I'm beginning to believe that small town America was invented by horror authors & Dawson's Creek. 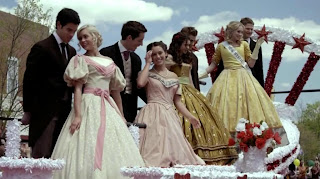 If you approach a guy & he's horribly rude to you, it's not because he's a jerk, it's because he's a vampire & he wants to kill you so he's really just being caring & kind by keeping you away from him. Isn't that nice to know?
Men do evil things for power. Women only do evil things for love.
Women really love sacrificing themselves.
It's only Too Late to save someone's life with Super Healing Vampire Blood when it is narratively important. Any other time, it works like a charm.
And even then, remember point 4 above.
Crying over Skype is a perfectly normal way for vampires, witches & humans to interact. 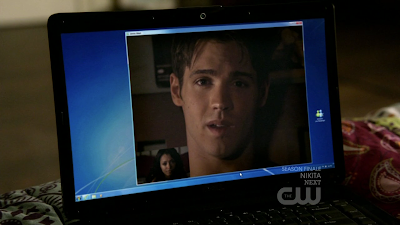 Okay, seriously, does anybody stay dead in this series?
Century old vampire Originals are totally hip with the cool kids & say things like OMG.
Everyone is originally from Eastern Europe. Except African-Americans. They're from Salem.
Everybody loves a good flashback.
Oh all right, men like to sacrifice themselves too... but only to save their families.
Okay seriously, the number one lesson I've learned from The Vampire Diaries is this: if anyone around you dies - a friend, a loved one, an enemy - don't sweat it (unless it's your enemy). They will come back to life within a few episodes, a season at most. Don't believe me? Just watch The Vampire Diaries.