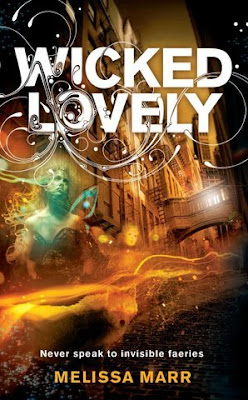 (This isn't about The Vampire Diaries, sorry. I will totally catch up soon though, I promise.)

When faced with a book synopsis that starts with Rule #3: Don't stare at invisible faeries, I was equal parts intrigued & disinterested. I was intrigued because that's a really great line, & disinterested because faeries, really? The prologue had me a little wary (it seemed to be very much of the fairies, really? variety) but my disinterest soon became reading-on-the-bus interest & even reading-while-walking-from-one-bus-stop-to-the-next interest. So let me preface this review by saying that I liked the book. And that I bumped into a lot of people while reading it. And a couple of lampposts.

Here is the full inside-cover synopsis:

Rule #3: Don't stare at invisible faeries.
Aislinn has always seen faeries. Powerful & dangerous, they walk hidden in mortal world. Aislinn fears their cruelty - especially if they learn of her Sight - & wishes she were as blind to their presence as other teens.

Rule #2: Don't speak to invisible faeries.
Now faeries are stalking her. One of them, Keenan, who is equal parts terrifying and alluring, is trying to talk to her, asking questions Aislinn is afraid to answer.

Rule #1: Don't ever attract their attention.
But it's too late. Keenan is the Summer King & has sought his queen for nine centuries. Without her, summer itself will perish. He is determined that Aislinn will become the Summer Queen at any cost...

(There will probably be spoilers in the rest of this review, so don't read it if you plan on reading the book. Unless you like spoilers. Some people are into that sort of thing.)

Aislinn is a pool-playing, rock-music-loving teenager who is just a little bit traumatised by the pretty horrific acts that faeries do to & around humans without our knowledge. She's always ignored the faeries she can see, until one of them becomes strangely fascinated by her & won't stop following her around. She finally confides in her friend-&-sort-of-love-interest Seth, & they decide to find out what Keenan the faerie Summer King & his tragic Winter Girl Donia want with her.

What Keenan wants is for her to be his queen, because that's ultimately what all men faeries want. He has also wanted a lot of other girls to be his queen in the last few centuries but only his One True Love can hold the staff of the Winter Queen without being burned by the frost & any girl who fails becomes a cold, bitter Winter Girl, endlessly bound to Keenan & always in pain, waiting for the next girl he chooses to try to take the staff. Any girl with whom Keenan falls in love becomes marked & begins to change into a faerie, so those who choose to try taking the staff & fail become pain-filled Winter Girls & those who refuse to try become pleasure-seeking Summer Girls. Women of both seasons are equally bound to Keenan. Overseeing all of this is Keenan's Very Evil mother, the power-hungry Winter Queen, who will stop at nothing to ensure that Keenan fails to find a Summer Queen, & who wants the world to be trapped in an Endless Winter Mwahahahaha.

So. The plot works well despite not being the most gripping, as do the various moments of menace & tension throughout the book, the wonderfully realistic & really quite creepy descriptions of the faeries, & a couple of spark-bright characters.

Aislinn's a pretty cool heroine. She's smart & capable & doesn't make any silly mistakes (unlike a certain famous heroine *cough*Bella*cough*). She also has an Awesome Feminist Grandma. Keenan is presented as charismatic but comes off as selfish, manipulative & stalkery (not unlike another supernatural love interest I could name). Donia is multi-layered & conflicted, & not presented as the angsty jealous lover she could easily have been. The relationship between her & Aislinn is one of the most interesting relationships in the book, & while I feel like it could have used more screen time (so to speak) it works really well & definitely adds something to the otherwise pretty straight-forward romance. However, Seth is a little too perfect to be a teenage boy, & the Winter Queen is like something out of a pantomime.

It's not that I necessarily need my faerie queens to be terribly believable, but one-dimensional villains that are a bit camp & more like Disney baddies than actual antagonists aren't as scary as the kind of unsettling villains you can almost understand. As for Seth, well, he's the boy all teenage girls who hate Edward Cullen dream of having. He & Aislinn start off as friends & he waits patiently for her to notice their growing attraction. Before they sleep together, he gets a full STI test & presents her with the papers. He makes the first move but respectfully (& very obviously) waits for her to retaliate & asks her if she's okay with what they're doing every step of the way. He won't have sex with her for the first time when she's feeling fragile & later even lectures her on the importance of consent. Oh & he goes down on her & is totally really great at it. And I am all for anti-Edward-Cullen characters, I really am. I am all for safe sex & the importance of consent & cunnilingus & other alliterative acts but Seth is not like any teenage boy I ever knew (no offence to the teenage boys I used to know). And that sort of takes away a bit from the believability of his character. Having said that, it's refreshing to see a kind, respectful young man as love interest in a supernatural young adult book, because those kinds of characters are few & far between.

I worried for about half the book that this was going to pull a Twilight with Team Keenan winning out over Team Seth in the end as the Summer King got progressively more sympathetic but it almost feels like Wicked Lovely was written in direct retaliation to texts like Twilight & although you sort of got where Keenan was coming from at the end, he's still a manipulative spoiled brat & Aislinn is smart enough to realise this.

All in all, Wicked Lovely was a lot better than I was expecting. It turns the tired tropes of Twilight & many of its offshoots on their heads, the action is pretty fast paced while still allowing for a certain amount of character development (if only for a select few) & both Aislinn's world & the invisible faerie world that exists alongside it are vibrant & believable. I won't be tripping over my feet to buy the sequel, but I'll definitely read it at some point, & with great pleasure.
Posted by Moïra at 1:37 PM