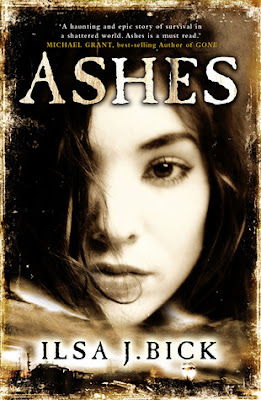 So you know when you pick up a book in the shop (after having judged it by its cover, of course), what's your criteria for determining if you think the book'll be good or not? Mine's pretty simple: I look at the cover, I look at the back cover, I read the prologue & the first few lines. Then, usually, I have an idea about whether or not I think I'll be interested in the whole book.

Here is the back cover synopsis of Ashes:

Seventeen-year-old Alex is hiking through the wilderness when it happens: an earth-shattering electromagnetic pulse that destroys almost everything.

Survivors are divided between those who have developed a superhuman sense & those who have acquired a taste for human flesh. These flesh-hunters stalk the land: hungry, ruthless & increasingly clever...

Alex meets Tom, a young army veteran, & Ellie, a lost girl. They will fight together & be torn apart, but Alex must face the most difficult question of all: who can you trust?

So already this book ticks a couple of boxes. Standard YA pretty-girl's-face-half-obscured cover? Check! Dystopia? Awesome! Zombies? Has potential! Probably resourceful female protagonist? Excellent! So I open the book, & that's when it happens.

Picture the scene if you will: me, beautiful, gorgeous, exquisite, radiant reader standing in the book shop, too old to be in the children's section but looks about sixteen so nobody bats an eye, coming face to face with The Greatest Prologue Ever. Now, I'm not generally a big fan of prologues. I write them, I read them (it's very unusual to find a young adult book without one) but I very rarely find that they actually add to the story. Except this one. This prologue puts all other prologues to shame. This may be the Prologue to End All Prologues.

Within the first six pages of this Most Wonderful Prologue of All this is what you, the reader, learn: Alex is hiking completely alone. Her aunt Hannah (presumably her legal guardian) calls her, not knowing where she is. Alex has her father's gun. She is not suicidal but has been in the past. She also has a brain tumour & the treatments she's been taking aren't working so she wants to take this hike while she still can. She is competent & resourceful (& has a wonderful narrative voice - all wry humour & matter-of-factness) & this'll be the last time she'll ever speak to her aunt again.

And just like that, you're hooked. There is no way you can't buy this book. The protagonist is clever, she has a fascinating backstory, & you know that zombies are going to come along at any minute. So you buy the book & read on.

(Also, because I think everybody should read this book, this review will contain NO MAJOR SPOILERS. I hope.)

That hooked feeling of I can't stop reading now because Something Dramatic is going to happen that will Change Everything lasts for pretty much the entire book. Every chapter ends with a cliffhanger that is carefully placed for you to keep turning the pages as fast as you can. The sudden apocalypse in the middle of nowhere is pretty much standard zombie fare, but the distinction between those who die immediately & those who become zombies is very interesting, & the fact that Alex, Ellie & Tom are pretty much alone in the wilderness for most of the book actually amplifies the post-apocalyptic anxiety.

Ashes is more or less split into two halves. The first half is fast-paced & hell-for-leather. The three characters, Alex, nine-year-old Ellie & twenty-year-old army dude Tom are all equally fascinating, & their relationships are complex & human, & make a lot of sense in context. Still, Alex's relationship with every other character is tinged with varying levels of uncertainty. Even grumpy Ellie & love-interest Tom are potentially keeping big secrets. So the first half swoops you, the reader, up & doesn't put you down until approximately halfway through the book, when Alex finds herself in Rule, a cultish little town that proves to be strangely adept at keeping the zombies at bay.

After that, the action slows down significantly but by now you're almost grateful because you've developed craps from turning pages so quickly & you really need a cup of tea.

The second half of the book is paced very differently & almost loses its voice a little - Alex is suddenly a lot less Alexy - but the chapters set in Rule end up being a little like the Hallows-searching sections in Harry Potter & the Deathly Hallows. A lot of readers thought those chapters were dull & lagging, but I like to see them as evidence of the writer emerging the reader in the characters' worlds. The characters feel bored & disillusioned, so the reader does too. I think that's what happens in Ashes. The various circumstances that bring Alex to Rule take their toll & so the character changes, & the story, so bound up in the character's narration, changes too. It's interesting in its own way, & it lets us see Alex, & the world she's suddenly woken up in - in a different light.

Then, about eight chapters from the end (this is a big book with small chapters), you forget everything I just said (just like you forget the fact that my pronouns are completely mixed up today) . The pace picks up, the action kick-starts again & within a few pages there's no way you're putting this book down again. By the time you close the book you're absolutely aching for the sequel, which, unfortunately, won't be available for another year.

Ashes, however, is. So if you like dystopias or zombies or survival-in-the-wilderness narratives or post-apocalyptic fiction (& who doesn't?) you really should at the very least read the Prologue of Amazingness. And I defy you not to read the whole book after that.
Posted by Moïra at 12:08 PM