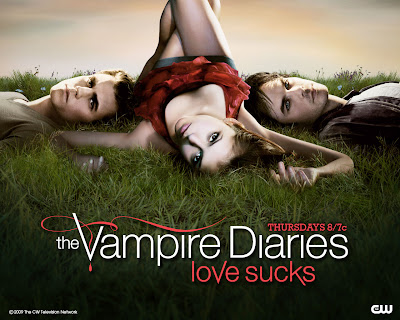 I have been a Very Bad Blogger & have missed a whole bunch of episodes of The Vampire Diaries which is clearly inexcusable so I just won't try to apologise. Instead, I propose some recaps! Lots of recaps! ALL the recaps! Here is what has been happening up to now in our favourite TV show about a girl who is a doppelgänger of an evil vampire who is in love with two vampire brothers who are both in love with the original doppelgänger girl & we're not quite sure which of them is supposed to be the Good Brother or the Bad Boy Brother in any given week. Also there are ghosts. And werepires. And witches who are all African-American because that makes sense. Actually, everything in this show makes perfect sense. Especially Viking names, as you will discover shortly.

When we left Mystic Falls many, many moons ago (too many moons ago), our loveable heroine Elena was in quite a pickle. Not only has her mopey vampire boyfriend Stefan gone Off the Rails & become a blood-drinking Ripper who is under the control of Evil English Klaus, who is a werepire, but her mopey boyfriend's charming & roguish brother Damon totally has the hots for her & isn't particularly subtle about it. But does she like him back? Or is she just not ready yet to admit that Stefan is Lost to Her Forever?

At the same time, Elena's little brother Jeremy (who is dating her best friend Bonnie, who is African-American & so therefore is a witch) has started seeing ghosts. Most importantly, he has started seeing the his staked-vampire-turned-ghost ex-girlfriends in the flesh! (Yes, he has more than one staked-vampire-turned-ghost ex-girlfriend. This is just that type of show.)

Also, Evil English Klaus (who is an Original Vampire as well as being evil, English, & a werepire) has an Evil English sister called Rebecca who is mostly evil in the sense that characters in Mean Girls are evil. Also, she is on the cheerleading squad, which is exactly where you'd expect a 1000 year-old Original Vampire to be. Evil English Klaus & Slightly Petty Rebecca are also in a pickle because they are running from Michael the Vampire Hunting Vampire, who wants to hunt them. Because they're vampires. Katherine, the vampire of whom Elena is a doppelgänger (is that even grammatically correct?) has just released Michael the Vampire Hunting Vampire from his tomb, so Klaus & Rebecca are really in for it this time.

Oh & also also also, Elena's friend Caroline the Bossy Blond Vampire is going out with Tyler who used to be a jock & then became a werewolf & now has been turned into an Angry Jock Werepire by Klaus. Also also, Tyler's uncle Mason, who was a werewolf but then was killed by Damon & Alaric (who is the father figure of the show) is now a ghost & seems to delight in invisibly torturing Damon.

Got all that? Okay, let's race through this recap together because there are plenty more to come! 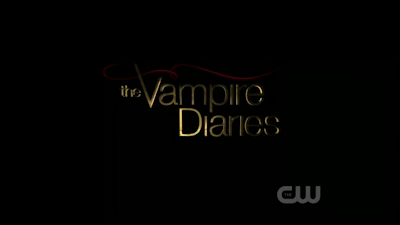 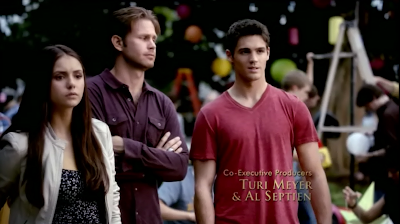 Bonnie learns that the ghosts being more visible than usual is All Her Fault & that losing her boyfriend to a dead girl is just one of the consequences of bring him back to life. Elena learns that in the past, every time Stefan went Off the Rails his best friend Lexie staged an intervention & made him flat-haired & broody again. But now Lexie is dead. If only we knew someone who could communicate with ghosts!

In other news, Matt is still Very Sad, Caroline is trying to set him up with Bonnie, Stefan quips a lot when he's evil, werewolf-turned-ghost (wereghost?) Mason is still pretty pissed off that Damon & Alaric killed him that one time, & Bonnie & Caroline are trying to find a way to make the ghosts go back to being invisible presences that can see living people at all times (like, even in the toilet) but can't communicate with them & just go around being all stalkery & invisible & (understandably) rather depressed.

Life Lesson #1: When you die, it really sucks.

Life Lesson #2: The only private places to do spells are abandoned haunted buildings. 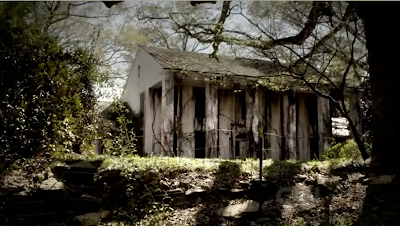 So while Bonnie & Caroline are invoking the power of the 100 dead witches Bonnie's dead witch grandmother, Jeremy & Anna OMG KISS.

Life Lesson #3: It's totes not cheating if the other girl's dead.

Bonnie & her grandmother then proceed to underline what I've said about this show from the beginning (i.e. NOBODY EVER STAYS DEAD IN THIS GODDAMN SHOW) by bringing ALL THE GHOSTS back to life. ALL OF THEM!

Luckily, one of those ALL THE GHOSTS is Lexie, whose first order of business as a now-corporeal ghostpire is to give Stefan a lecture about how terribly Off the Rails he is. And when he acts all Bad Boyish & tells her he doesn't care, Lexie smashes his face into a car window. Cause that's the only way to get through to addicts. 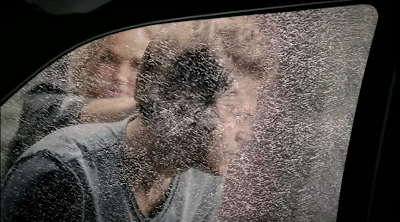 Lexie: she is the badassest.

Meanwhile, in the creepy abandoned building, Grams tells us that everything is all Bonnie's fault because when she brought Jeremy back from the dead she left The Gates open & then all the cows ghosts got out. How does Grams know all this? Because

Naturally, though, there is a way to close The Gates. Can you guess what it is? That's right! It's Elena's Magic Witchy Necklace that Stefan gave her when he was a Good Guy & that belonged to Rebecca before that & before Rebecca had it it belonged to the Original Witch. Bonnie must now destroy the necklace, but with Lexie about to start Elena on the Stefan-Ripper Detox Crash Course, Elena doesn't want to close the gates any more.

Meanwhile, Mason, unlike Lexie, has got his priorities straight. His first order of business as a now-corporeal wereghost is to go to the pub. Turns out, he doesn't want revenge against Alaric & Damon, he just wants to drink. And to help our heroes find a weapon that can kill Klaus so that his newly werepired nephew can break free from Klaus's control. Oh, & he also wants Damon to apologise for having killed him. Which Damon does. Adorably.

That creepy dungeon cell under the Mystic Falls jail really does get its uses, doesn't it? This episode, it is the setting for Elena & Lexie's ghostpire intervention. 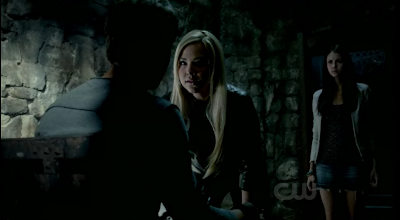 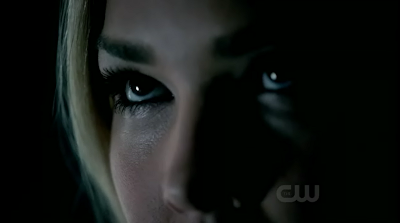 To make Stefan do this: 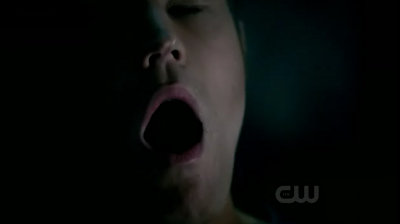 Lexie's Sexy Eyes can also make Stefan believe he has been starving of blood for about three months. Hallucinations & high jinks ensue.

Meanwhile, in the Secret Prehistoric Viking Caves underneath the town (yes, you did just read that right), Mason & Damon may have found a clue to the whereabouts of the weapon that can kill Klaus.

At the same time, Caroline tells Bonnie that her boyfriend's been cheating on her with his ghostpire ex-girlfriend, Lexie starts to torture Stefan as part of the intervention but Elena turns & runs because she clearly doesn't have what it takes to put a Ripper back on the straight & narrow path, & a whole bunch of ghostpires turn up at the town celebrations & start killing members of the founding families. 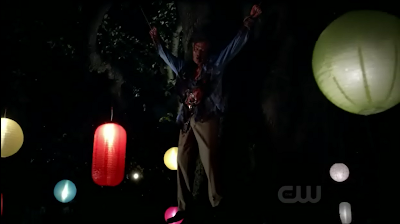 I'm surprised there are any of them left at this stage.

Unfortunately, the Magic Witchy Necklace is missing, so there's no way to make the founder-killing ghostpires go away. Did Anna steal the necklace? Let's have a look at her motivations:


So what do you think, did Anna steal the necklace? 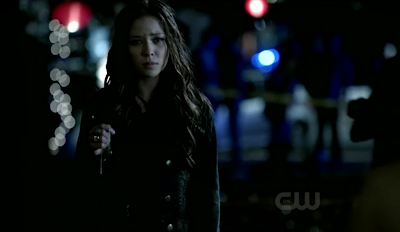 Of course Anna stole the necklace.


Elena lectures Anna on letting Jeremy go, Anna returns the necklace, the ghostpires run around attacking people & somewhere in the midst of all of this Caroline finds the time to be completely awesome & single-handedly save Mrs Lockwood from impending death. Go Caroline!

Jeremy & Anna say their goodbyes, Jeremy gives Bonnie the necklace, & Elena tells Lexie she's out of time because the necklace is about to be destroyed. In an effort to reconnect him with his humanity, Lexie reminds Stefan that the necklace has always represented hope for him. Stefan thinks it's pretty ironic that while that's true, & it could be the key to de-Ripperfying him, the necklace in question is about to be blown into pieces.

This week's song seems to be about standing outside & Bonnie & her ghost grandmother chant in Latin as the Magic Witchy Necklace burns. Cut to the party where Caroline beats up ALL THE GHOSTPIRES & the song says something about crowds & falling. Cut to the Secret Prehistoric Viking Caves (into which Damon is not invited, I forgot to mention) where Mason holds up his light & says that he has Found Something & the song is all about giving me peace. Then he conveniently disappears before letting Damon know what he's seen. Cut to the dungeon where Lexie tells Elena that's Stefan's still in there & the song is all about giving me love. Elena tells Lexie she knows what to do now (I mean, I wouldn't mind learning that Sexy Eye Trick...) & Lexie disappears too. Cut to the town where a Very Sad Anna is walking away but looks up & sees her mother. They hug & disappear together & the song is about crying but not letting it show. Cut to the abandoned house where Grams tells Bonnie she is stronger than all of this & the song is about all the things you wanted to do but never did. Then Grams disappears too & everybody's crying & the song ends & we start on the weekly post-emo-pop-song-dramatic-montage cliffhanger scene.

Aaand it's a Beautiful Bromance scene! I love Beautiful Bromance scenes! Damon, who is still stuck in the Secret Prehistoric Viking Caves but can't get further than a certain point because the Prehistoric Vikings never thought to let him in, has called Alaric to come help because, apart from Elena, Alaric is the only person he trusts. All together now, awwww. Alaric, however, doesn't trust Damon since Damon killed him that one time. In a rather epically adorable scene, Damon apologises to Alaric with the exact same words he used to apologise to Mason (only he means them this time). Then he shows Alaric his Flirty Face: 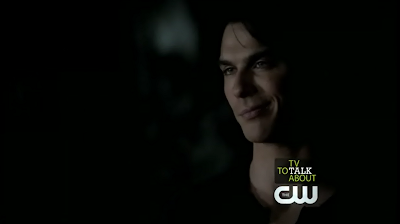 Meanwhile, Stefan wants to know what Elena's going to do now that Lexie & her Sexy Eyes have disappeared. Elena is not going to Give Up Hope but tells Stefan that if he doesn't find his humanity again he'll lose her forever because she has learned a lot from her little brother's ghostpire misadventures & refuses to love a ghost. Stefan ponders this, sweatily. 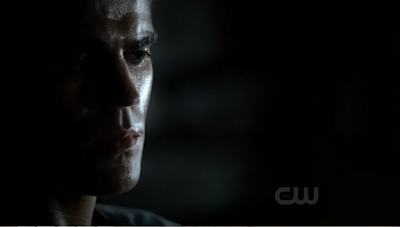 Then Elena locks him in the dungeon.

In the haunted house, Bonnie is Very Sad & (understandably) angry at Jeremy. But then there comes a strange noise from the fireplace! The fire flashes! The necklace reappears in the flames, completely whole! Even freakin necklaces don't stay dead in this show!

Back in the Secret Prehistoric Viking Caves, Alaric finds what Mason was looking at when he disappeared. The big secret to destroying Klaus forever is... 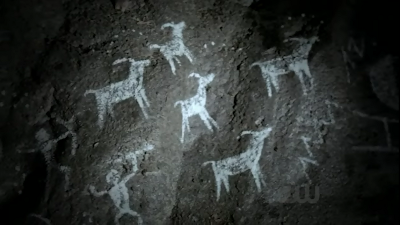 A cave painting of some horses??